Matese Lake: a treasure of Campania! 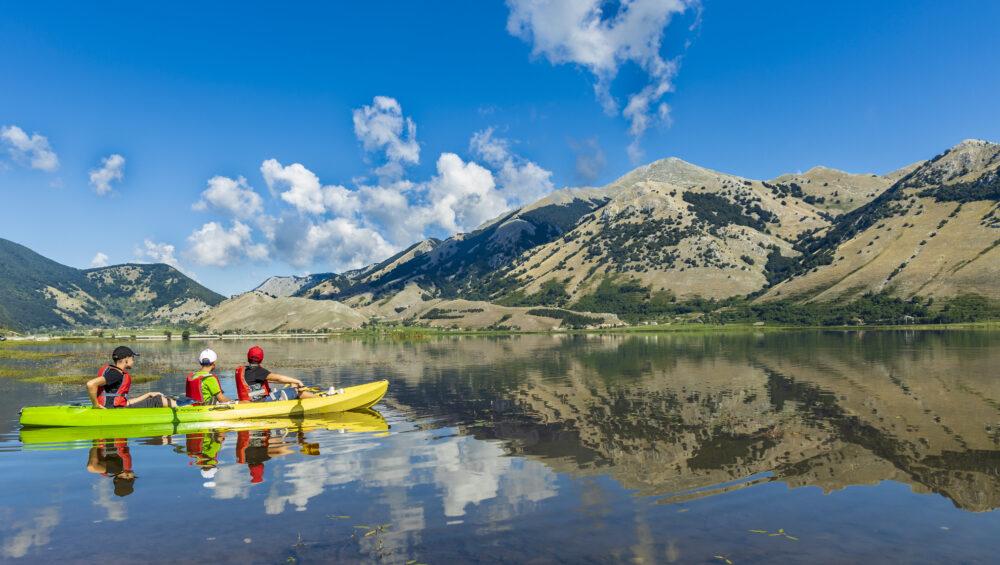 Lake Matese is the highest karstic lake in Italy, located at the foot of Mount Miletto (2050 m asl) and Mount Gallinola (1923 m asl) in the Matese mountain range, in the municipalities of San Gregorio Matese and Castello del Matese in the province of Caserta. It has no tributaries, but fills with water coming from the melting snows of Mount Miletto and Gallinola Matese and from some perennial springs.
We leave you with Valerio Ferrazza’s wonderful article on Matese Nostrum ( www.matesenostrum.com)

Lake Matese, the heart of the Regional Park, gives the Matese an aspect that characterises and differentiates it considerably from the other mountain groups of the Apennines.

At 1,007 m above sea level, it has earned the title of the highest karstic lake in Italy.

The origin of this endoreic zone (i.e. an area where surface watercourses do not flow directly into the sea, but into an inland or lake area) is connected with tectonic activity during the Pliocene sup-Pleistocene (3.6 million – 126,000 years ago) . This activity generated uplift of normal faults and graben formations (sunken portions of the earth’s crust). During the Pleistocene-Holocene environmental changes (2.58 million – 11,700 years ago), karstic processes transformed this area into the present-day endoreic area.

[Model describing the karstic structure of the plain that hosts Lake Matese].

This led to the formation of the tectonic-karstic depression (Polje) that hosts the lake. As already described in the article ‘Karstification in the Matese’, the polje is a typical karst field that is generally closed and seasonally flooded, with a flat, horizontal bottom, no less than one kilometre in length, and bordered by very steep slopes (generally 30°). The Matese Lake polje, which covers an area of 45 km², is delimited by the slopes of M. Miletto – La Gallinola to the north and M. Maio – M. Pranzaturo to the south.

The impermeability of the lake bed is due in part to the chemical process of the dissolution of the limestone whose insoluble residues settle to the bottom, and in part to the tuffaceous ash from the nearby volcano of Roccamonfina. Other sealing agents of the bottom are the alluvial sediments from the water-driven disintegration of rock from the nearby slopes, as well as sediments of clay and organic origin (plant remains, algae, etc.).

The lake is fed by springs on the north bank (not very visible as they are covered by gravelly debris lying on small cracked dolines) as well as by small seasonal streams generated by rainfall and melting snow, active from autumn to spring.

Also near the north bank, in the locality of San Michele stands Monterone, a small dome-shaped hillock, the only one remaining of others (D.B. Marrocco), which turns into an islet during the winter-spring period. This islet is marginally shrunk by the chemical corrosion of the limestone due to frequent flooding. This karstic structure is called Hum.

[The hillock of Monterone: this type of karstic structure is called Hum.]

Given the karstic nature of this lake, there are swallow holes on its southern shores, cemented in the 1920s for hydroelectric purposes: Scennerato (the largest), Brecce, Caporale and Bufalara.

There is a connection between the Scennerato swallowhole and the Torano torrent that has been confirmed by hydrogeological analyses before and during the work in 1920 (Ruggero 1926) and by tests using tracers (Civita 1969).

Currently, the lake level reaches 1,012 m a.s.l. and a volume of 15,000,000 m³ of water. Prior to these hydraulic works, the connection between Lake Matese and the Grassano-Telese springs was discussed by Gauthier (1910), who described how a possible dam in Lake Matese could influence the regime of these springs as well.

The lake also receives power from rainfall, which averages 1,808 mm per year. The average annual temperature is 9.3° C (Fiorillo et alii, 2015), while the water temperature remains between 20° C and 22° C in the summer. In the basin of the lake, the temperature can drop to 20°C below zero in winter (D.B. Marrocco), a temperature at least reached in the last century.

[In the image: rainfall distribution for the Matese massif. The endoreic areas are delimited by the yellow line (Fiorillo F. et al., 2015)].

Celico F., Petrella E., (2008). – Evolution of hydrogeological knowledge of the

Ferranti L. (1995) – Tectonics of the central-eastern Matese and comparison with the